Geminids 2017: Do not miss the Christmas shower!

The Geminids, along with the Perseids, are the most intense rains of stars of the year. The European project STARS4ALL and sky-live.tv, bring the shower to your home. Live, from the clear Canary Islands skies.

Are you ready? Geminids are, along with Perseids, one of the two great meteor showers of the year. This shower is reliable, punctual and full of stars. Last year’s activity reached 100 meteors per hour (ZHR, zenith hourly rates, see Geminids 2016).

For this year the maximum activity is expected at dawn on December 14 (06:30 UT), therefore, the best nights for observation will be those of December 13 and 14. A waning Moon will not be a problem for observing the shower that will offer its maximum splendor around midnight in Europe.

Where to look? They seem to come out from Castor and Pollux – their radiant -, the brightest stars of Gemini constellation. With the naked eye and without anything but a lot of patience, you will be able to observe bright meteors. Just as one condition, the sky must be clear and free of artificial light and clouds. Stare at an area of ​​the sky and keep looking at it for a few minutes. We recommend you lie on the floor, wrapped up in warm clothing. The sky will do the rest.

We will broadcast live from the Canary Islands, the entrance of these small fragments left by the asteroid (3200) Phaethon, into the terrestrial atmosphere. This tiny celestial body, is considered the Geminids progenitor since 1983, driving some astronomers crazy. A UCLA team led by Dave Jewitt, studied the results of NASA’s STEREO space-based observatories. These are our eyes on the Sun for asteroids and comets hunting for when they approach the star. Jewitt and his team realized in 2010 that Phaethon’s intensity had increased. They thought, then, that the asteroid wasn’t like regular ones, but was something new that they called “rocky comet”, a hybrid between an asteroid and a comet. Phaethon is a curious asteroid that gets so close to the Sun that the heat emitted by our star burns the dust residues that cover the rocky surface, which detach and make a gravel tail. And it does this quite often: every 1.4 years, like a comet would do. Jewitt, who will take part in our broadcast live on December the 14th, says: “Phaethon is too hot for water ice to survive, rendering unlikely the possibility that dust is ejected through gas-drag from sublimated ice. Instead, we suggest that Phaethon is essentially a rock comet, in which the small perihelion distance leads both to the production of dust (through thermal fracture and decomposition-cracking of hydrated minerals) and to its ejection into interplanetary space (through radiation pressure sweeping and other effects) “.

Javier Licandro (IAC), qualifies “(3200) Phaethon, with 4 or 5 km in diameter would totally destroy the Earth if it hit us. The collision would produce a global catastrophe that would probably terminate all species including ours. However Phaethon is a minor risk on the list of potentially dangerous bodies. However, we should keep an eye on it because the orbits of these small asteroids pass close to the Earth and are affected by so many effects that may cause a collision in the future”

It is curious that this shower, being one of the most attractive showers for many researchers, wasn’t observed until 1862.

This year, on December 14 at 00:05h UT, the Full Moon will coincide with the moment of Geminids maximum activity affecting the sky’s brightness and obscuring the weakest meteors .

Shooting stars are usually small dust particles of different sizes (some are smaller than grains of sand) detaching from comets or asteroids along their orbits around the sun. The resulting particle current (called meteoroids) is due to the melt produced by the solar heat and they are dispersed along the comet’s orbit, which is crossed every year by the Earth in its orbit around the sun. During this encounter, the dust particles disintegrate when entering the Earth’s atmosphere very quickly, creating luminous streaks known as meteors.

The STARS4ALL project will broadcast, from the sky-live.tv portal, the meteor shower, from the Teide Observatory (IAC, Tenerife, Canary Islands, Spain). It will be the night of December 14 from 23:00 UT-local (24:00 CET).

The Geminids observation will be used to develop several educational activities by secondary students (more information in astroaula.net). One of them will be to estimate the meteor shower activity from visual observations.

STARS4ALL (stars4all.eu) is a project funded by the European Union’s H2020 Program, under contract number 688135. STARS4ALL involves eight institutions (UPM, CEFRIEL, SOTON, ECN, ESCP Europe, IAC, IGB and UCM) from European countries. The goal of STARS4ALL is to raise public awareness of the existence of light pollution in many of the places we live in and the importance of taking measures to reduce it. 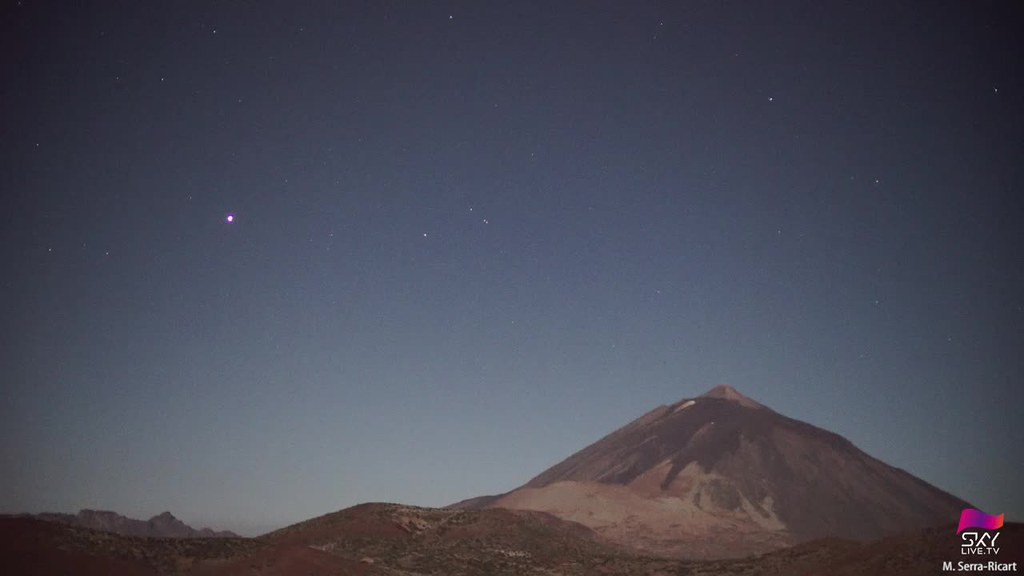 Geminids over Teide Observatory. The OGS Telescope (ESA) is shown in the foreground. Centered in the image the Orion constellation and the brightest object is the Planet Jupiter. J.C. Casado – IAC. Geminid on the right of the peak of the Teide volcano with the Orion nebula. The lights near the peak are climbers. The image was obtained at dawn on December 10, 2016 from the Observatorio del Teide, Instituto de Astrofísica de Canarias. J.C. Casado – IAC.